Due to inactivity you will be logged out in .
Warning! Due to , your session has expired. Please save any data you may have entered before refreshing the page.
Enable Section 508 Skip to main content

As part of the agency's efforts to improve diagnostic safety and quality in healthcare, AHRQ has released the Common Formats for Event Reporting - Diagnostic Safety Version 1.0 (CFER-DSV1.0). The CFER-DS is intended to help healthcare providers collect data for analysis of Diagnostic Safety Events in a standardized manner across healthcare settings and specialties for the purpose of learning about how to improve diagnostic safety and better support clinicians in the diagnostic process. Widespread use of the CFER-DS will make it possible to collect, aggregate and analyze diagnostic safety-related information from healthcare providers across the country, which in turn will accelerate learning in this important area of patient safety.

Common Formats for Event Reporting - Hospital Version 2.0 (CFER-H V2.0) constituted a major release of the AHRQ Common Formats. CFER-H V2.0, published in May 2017, incorporated new and modified content as well as technical specifications revised since the release of CFER-H V1.2. CFER-H V2.0 represented an overall decrease in scale from CFER-H V1.2 to reduce the reporting burden. CFER-H V2.0 consolidated the HERF, PIF, and SIR forms into one module, called the Generic module. This version also eliminated paper forms to encourage electronic reporting of patient safety concerns. Additionally, Core vs. Supplemental data elements were defined, with Core being content required for event reporting to the PSOPPC for national aggregation and analysis, and Supplemental being for optionally collected data by providers for additional analysis that could be reported to the PSOs but would not be accepted by the PSOPPC for national aggregation and analysis. In August 2018, CFER-H V2.0a was released with minor technical changes. 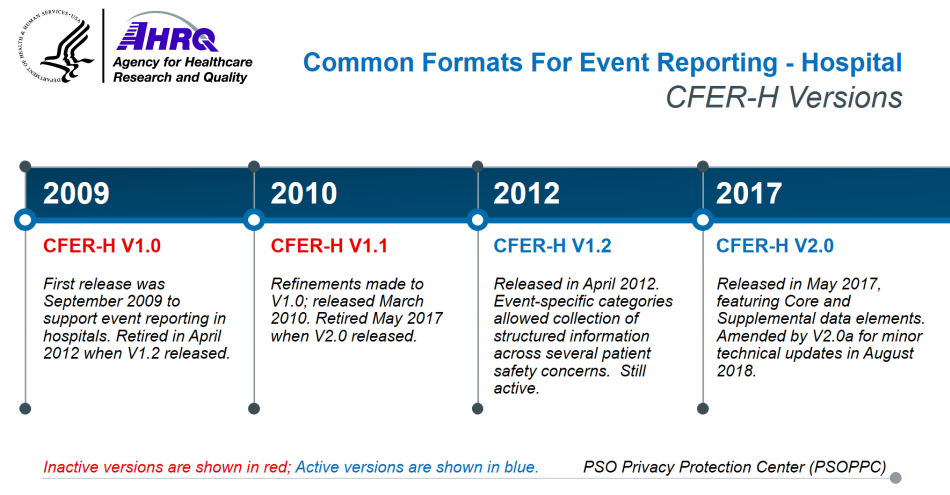 AHRQ released the Common Formats - Retail Pharmacy Version 0.1 Beta in October 2015. AHRQ worked with the NQF based on the public review and comment received, and developed and released the Common Formats for Event Reporting - Community Pharmacy Version 1.0 (CFER-CP V1.0) in December 2016. The CFER-CP V1.0 module is designed for use in the community pharmacy environment to gain enhanced understanding about the circumstances surrounding patient safety data in the community pharmacy setting. This module is self-contained, covering everything necessary to report patient safety data in the Community Pharmacy event-specific category.

Patient Safety Concerns - What Gets Reported?

Patient Safety Concerns include any circumstance involving patient safety, and encompasses patient safety events (both incidents and near misses) and unsafe conditions.

Only active versions of the Common Formats are accepted by the Patient Safety Organization Privacy Protection Center (PSOPPC).

CFER-H V1.2, released in April 2012, incorporates all of the content updates made to the Common Formats and includes full technical specifications for electronic implementation.

CFER-H V2.0, released in May 2017, incorporates all new and modified content applied to the Common Formats for Hospitals and provides full technical specifications and supporting documentation for implementation. A minor technical release (CFER-H V2.0a) was implemented in August 2018. CFER-H V2.0 is also available for submission through the Single Report Data Submission (SRDS) tool.

Both CFER-H V1.2 and CFER-H V2.0 are active for reporting to the PSOPPC and for implementation and use by healthcare providers in hospitals and PSOs.

CFER-CP V1.0, released in December 2016, is the first version of Common Formats for the Community Pharmacy setting and is active for reporting, implementation, and use by community pharmacies and PSOs.

CFER-NH V1.0, released in August 2019, is the first version of Common Formats for Nursing Home setting and is active for reporting, implementation, and use by nursing homes and PSOs.

CFER-DS V1.0, released in May 2022, is the first version of Common Formats for Diagnostic Safety. CFER-DS V1.0 can be used across all healthcare settings. It is active for use by healthcare providers and PSOs and is also available for submission through the SRDS tool.